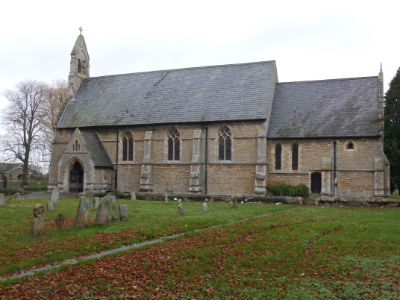 Towards the middle of the nineteenth century the Parish of Pinchbeck, based around the Parish Church of St Mary's, was amongst the largest in the country. It had only a very limited internal road network, and was in the opinion of the Vicar, Revd Canon West Wayet, too large to administer effectively as a single unit.

Canon Wayet had some influential friends. In 1847 he persuaded the Tractarian and well-known architect William Butterfield (1814-1900), designer of All Saints Church in Margaret Street, London (1849) and Keble College in Oxford, to accept a commission to build a church, parsonage and schoolhouse in West Pinchbeck.

The site for the new Church complex, off Six House Bank in Pinchbeck Bars, was donated by a Miss M Johnson of Blundeston in Norfolk, while the building project and the provision of a stipend for the new parson was funded by the sale of part of Revd Wayet's personal estate.

The foundation stone was laid by Canon Wayet on the Feast of St Bartholomew (24th August) 1848, and the new Church consecrated on 9th July 1850 by the Lord Bishop of Lincoln, the Rt Revd John Kaye. The first Priest in Charge, Revd Hector Nelson, served also as Schoolmaster while the new complex became established.

Sadly in 1896 structural defects within the original foundations left the church building in danger of collapse. Remedial action would include the strengthening of the foundations in six places, widening the brick and cement footings and capping them with slabs of York stone. Dislocated stonework in three arches needed to be re-seated, and iron tie rods installed to halt the bulging of the walls caused by the weight of the roof.

This essential restoration work, estimated at £300 - at that time a considerable sum - necessitated the formation of a fundraising committee and a direct appeal to parishioners and friends of the church raised £160, of which the first £50 came from Ann, the widow of Canon Wayet. A two-day bazaar raised a further £246.12s.6d, leaving a sufficient surplus after the repairs to thoroughly clean and beautify the Church.

St Bartholomew's was re-dedicated at 2:30pm on Wednesday 20th October 1897 by Bishop Edward King. The service was followed by a public tea - a tradition still continuing today in the form of a Parish Picnic after our annual Patronal Festival.