The present church, built to replace a Norman church on the same site, was thought to have been built in the middle of the 13th Century (AD 1260).

There are three distinc 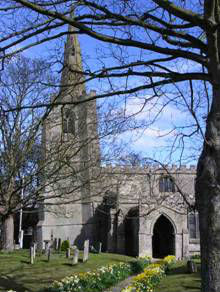 The leaning tower, with its peal of twelve bells, is six feet four and a half inches out of perpendicular and quite the most distinctive feature of the church.

Inside the church is the tomb of Sir Hugh - a survivor of the Battle of Crecy, who in gratitude for his safe return endowed Surfleet St Laurence with funds to add a spire to the already alarmingly leaning tower, which had by then stood for nearly a hundred years.

The early 15th Century saw more alterations because of concern for the west end of the church. The north aisle was shortened by one bay and the western piers were buttressed to relieve the pressure on the tower.

Surfleet St Laurence suffered some damage during the Civil War; one of the doors shows evidence of the strike of musket balls, while the nave was used as a stable for parliamentarian horse.

In the open churchyard, with its garden of remembrance for the interment of cremated remains,  stands The Fraiser Room - once a schoolroom endowed in 1764 for the education of 20 poor children of the Parish, and now used as a community meeting room.