St Mary’s Church is an historic Grade I listed building set in a three-acre churchyard within the Pinchbeck Conservation area. Its origins are Saxon and Norman, but the present building dates from the 12th Century. Throughout the medieval period the village traded in horses, cattle, flax and hemp - the proportions of the church building reflect this prosperity. 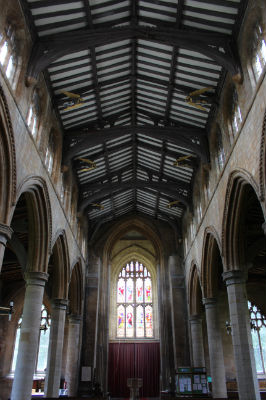 The nave roof is supported by alternating circular and octagonal piers, raised in height in the late 12th and early 13th century. 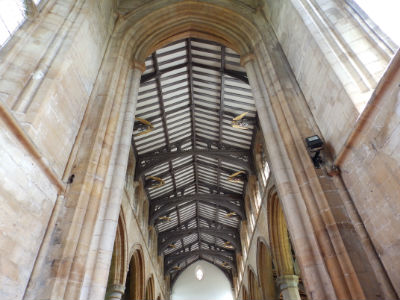 The ten painted and gilded wooden angels attached to the brackets of the hammer beam roof date from 1495. 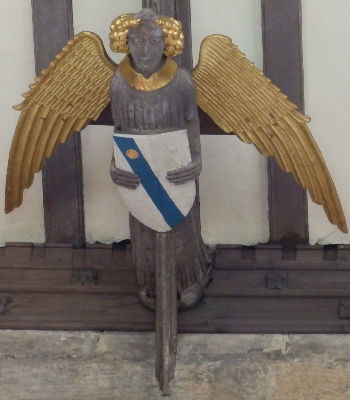 Each angel carries a shield bearing the arms of a family into which the Pinchbecks married. 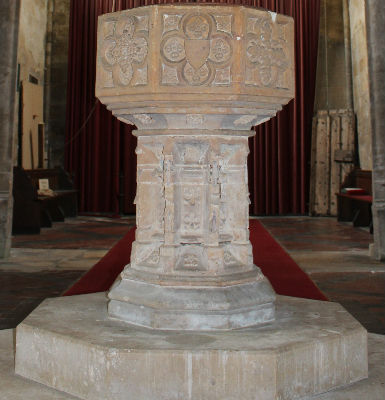 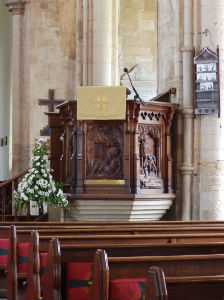 The pulpit has some lovely oak panels carved in 1915 by Belgian refugees funded by the Vicar, Rev’d Frank Field Wayet, whose son had been killed at the Battle of Loos in September 1915. 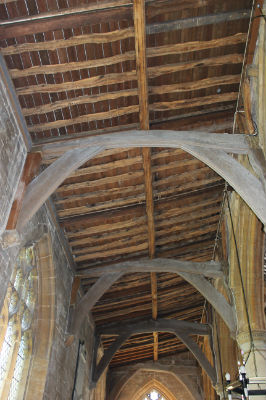 These five-bay arcades are accessed from the nave through arches. The southernmost displays a simple Norman chevron or zigzag pattern and gives every indication of being of an earlier date than the other (pointed, Early English) nave arches, which are all of one style and joined together with a line of dog-tooth decoration. This combination of apparently Norman decoration on Early English arches may constitute a significant example of the transition between the two styles. 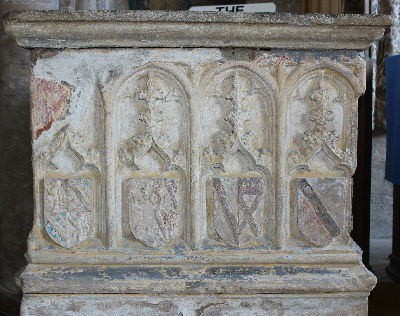 The south aisle contains the 15th Century table tomb of Thomas
Pynchbecke, whose family links with the village can be traced to 1275. The tomb contains recesses which once held brass inserts. The 22 heraldic shields of the de Pynchbecke family, under arches on the Tomb sides, were originally painted. 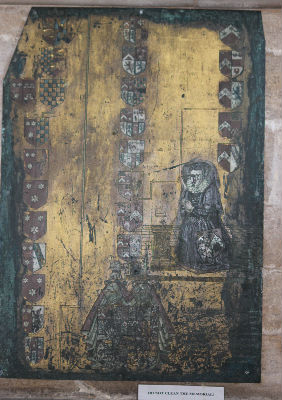 Above the Pinchbeck tomb, mounted on the wall, is the Lambert Carr Memorial - a 17th Century painted brass tablet relating to Lady Margaret Lambert, showing her ancestry back to the time of William the Conqueror. Lady Margaret was buried in 1608. 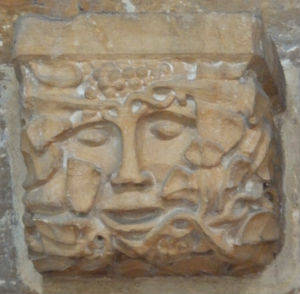 There are also two excellent examples of Green Men in the church, one set into a corbel in the North Arcade (left) and the other in the roof near the east end of the Lady Chapel. 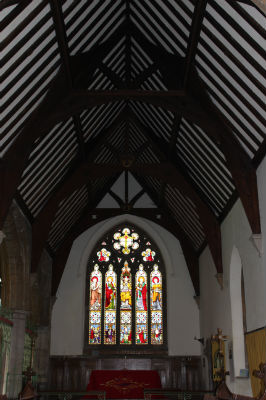 This was restored in 1855-64 by the eminent Victorian architect William Butterfield, in the style of the Oxford Movement. This includes a Butterfield Vestry and inner porch.

To the right of the altar is a recessed Sedilia (seat) and Piscina (sink). The carvings above symbolise the four Gospel writers: Matthew (angel), Mark (lion), Luke (ox), John (eagle). 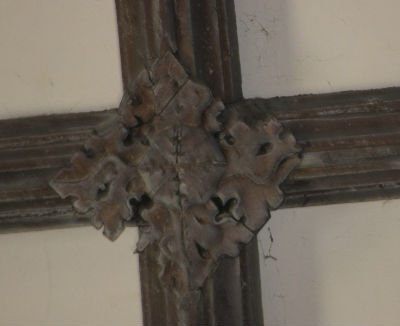 These date to c1490. Some remnants of early painted decoration can also be seen on some timbers towards the east end. 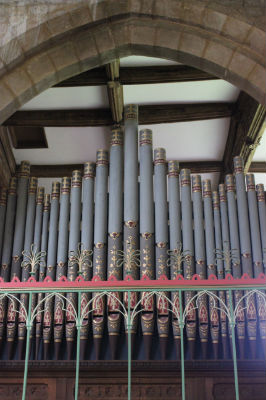 The organ, by Forster and Andrews of Hull, dates from 1891. It was the subject of a major restoration in 2006 as a result of a vestry fire. 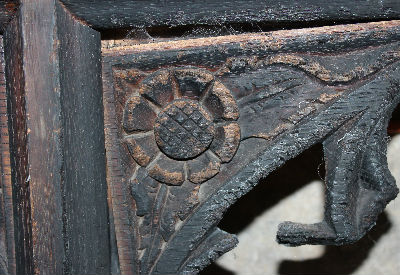 This delicately carved pew is thought to have been placed in the Chancel when the east end of the Church was restored by the famous Victorian architect George Butterfield. It was used in the Chancel by those assisting at the Eucharist until 24th March 2006, when a fire started in the Vestry occasioning smoke damage to the whole of the building and its contents. Some articles of furniture in the Vestry and Chancel were wholly or partially destroyed, including this Pew, which was located against a screen separating the Chancel from the Vestry. The church was closed for cleaning and restoration until Palm Sunday 2007. The pew was retained in its unrestored state as a memorial to this important episode in the life of the Christian community. 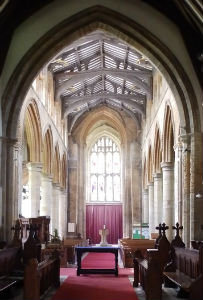 The tower and nave communicate through a slender arch. The west doorway (c1380) is deeply recessed.  It has an ogee arched canopy with a finialed hood and bears a King’s head on the south aisle and a Queen’s head on the north. 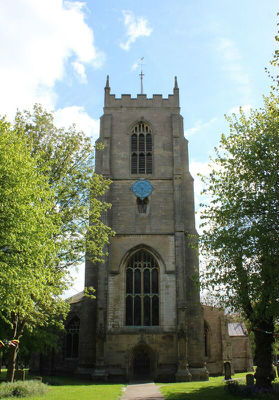 The tower, built in the 14th Century and probably intended to have a spire, can be seen to lean significantly to the south west. The lower rises are out of true when compared with the final rise of the parapet.  The tower windows are not central between the buttresses, nor concentric in the different stages. 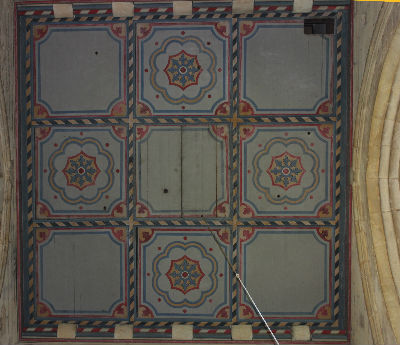 A rise in floor level has shortened the Arch of the West Door and the doorway to the Belfry, as well as covering the base plinths of the pillars in the Nave. In the corners of the tower below the ceiling (the floor of the ringing chamber) may be seen the springers for a vaulted ceiling which was probably abandoned when the building of the tower was postponed due to subsidence. 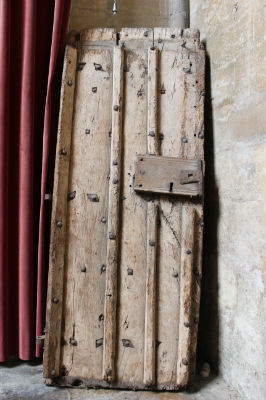 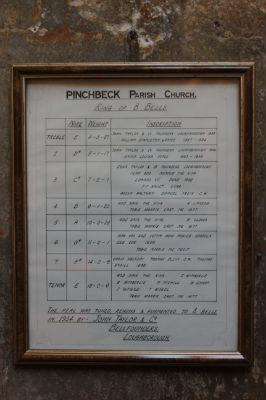 The tower boasts a peal of eight bells with the tenor weighing over eighteen cwt. Some of the bells date from the seventeenth century.

The south porch, in the Decorated style, bears the remains of an original vaulted roof.  There are two angel heads on the inner archway; the angel to the south, though much eroded, appears to be in prayer, while the angel to the north is flagellating himself, a popular practice at the time of the Black Death in 1349. 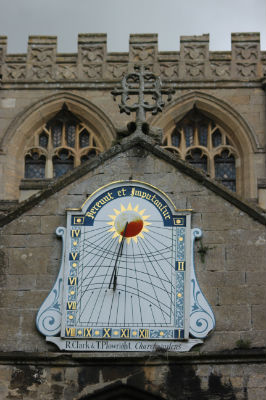 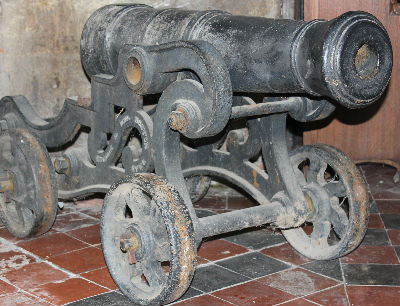 The Pinchbeck Cannon was found on Frieston Shore along with two cannon balls. It is thought to have been in use during the Crimean War (1854-56). It is mounted on a cast iron ship's carriage and was made by George Jackson of Fishtoft, who worked for Howden & Son of Boston. The year 1848 is stamped on the carriage. It was bought by Thomas Plowright who died in Kimberley in South Africa (see monument in south aisle) and eventually given to Lt F M Wayet, son of the Vicar of Pinchbeck. Its length is 41", and its calibre is 2 & 5/8"; its condition is such that it could still probably fire a 3lb cannon ball approximately 1200 yards.

The church also holds a communion table dated 1656 and some contemporaneous church plate from the Cromwellian period, now housed at the Treasury in Lincoln Cathedral.

Return to Church and Grounds.