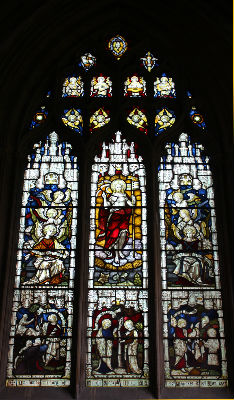 This window shows Jesus as victor over his own death, and the death of others. The panels are late Victorian with a dedication for Joseph Henry Burg MA, who died at the age of 27.

The large central panel shows the risen Christ, with marks of crucifixion on his hands and feet. He is surrounded by glory and carrying the banner of victory.

In the panels to right and left are groups of angels bearing banners with gospel quotations referring to the empty tomb: “Jesus who was crucified … he is not here. Behold the place where they laid him”.

In the three smaller pictures at the bottom of the window, two incidents are pictured in which Jesus raised others from death.

In the left hand picture Jesus is raising the son of a widow from Nain. The young man can be clearly seen sitting up in his grave clothes. The widow in the foreground and a few witnesses, representing a large crowd, are also pictured.

The central picture relates to the raising of Lazarus after his fatal illness. In the central picture Jesus tells Lazarus’ sister Martha, “your brother will rise again”. Martha hears this, dutifully, as a commonplace statement that Lazarus will rise with everyone else, on the last day.

In the right hand picture Jesus corrects Martha’s assumption by calling Lazarus from the tomb. Lazarus emerges wearing grave clothes. Martha, again wearing a brown dress, is present with her sister Mary, while two curious onlookers watch from behind a tree.

In the small panels in the tracery at the top of the window can be seen (from the top) the hand of God the Father, the Lamb and Flag (a symbol of Jesus’ resurrection) and the dove, the sign of the Holy Spirit. Together these depict the Holy Trinity. In the rows below are angel musicians and the six-winged cherubim who attend the presence of God.

This window presents Christ as the Good Shepherd. It was dedicated in 1887 – coincidentally the Golden Jubilee of Queen Victoria, and honours Revd. West Wayet, the Vicar of Pinchbeck between #### and ####. Revd Wayet established the daughter Church of St Bartholomew at West Pinchbeck and paid for the building himself, so the clear suggestion is that like Jesus and Peter, the Revd Wayet was a good shepherd to his flock.

The left hand panel, a visual metaphor, pictures Christ with a shepherd’s crook and real sheep. On his hands and feet are the marks of crucifixion.

The right hand panel depicts Peter with two other disciples, probably James and John, in a scene referring to the risen Jesus’ first meeting with Peter after the resurrection.

In this painful encounter Peter is mindful of having denied Jesus three times following his arrest. Jesus now restores Peter to a position of trust and confidence by asking him three times, “do you love me?”

Each time, Peter replies “yes” and Jesus responds with the words in the banner: “Feed my lambs… feed my sheep”. Peter himself is to be the shepherd of the flock of Christian believers.

The top pane is a picture of a Lamb and Flag. It tells us that Jesus himself is the sacrificial lamb whose death takes away the sin of the world; he has conquered death and is the victorious sacrifice.

This window presents the resurrection of Jesus by showing us the empty tomb.

The left hand panel pictures the three women who have arrived at the tomb. Mary Magdalen, in the foreground, has flowing hair and an ear-ring. The older and more respectable women wear their hair covered. A pot of aromatic oil for anointing the body can be seen on the ground.

The right hand panel depicts two men, clearly identified as angels by their wings and coronets, holding a banner quoting Luke’s gospel account of the incident: “He is risen. He is not here.”

One angel sits casually on the tomb, pictured here as a very Victorian box-like sepulchre. Lilies, symbols of purity, can be seen in this panel. 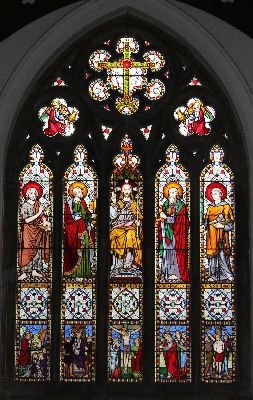 The central panel shows Jesus, risen from the dead, ascended to the Father and seated on his throne in glory – “sedebit rex” means “he is seated as king”. To left and right are St John the Baptist, St Peter, St Paul and St Stephen, each holding a copy of the Scriptures and symbols of their life and ministry.

In panels from left to right: John the Baptist wears camel skin and holds a lamb; he was the first to recognize Jesus as the sacrificial Lamb of God. St Peter holds a large elaborate key to the Kingdom of heaven. St Paul wrote many of the letters of the New Testament. Here he carries the `sword of the Spirit’ (the word of God) – the weapon of Christians in the daily fight against evil. St Stephen was the first Christian martyr, stoned to death for his testimony to Christ – which was seen as blasphemy. He holds the rocks with which he was stoned.

The top panel shows the cross and angels wafting incense. The bottom panel contains small and non-chronological scenes from the last week of Jesus’ earthly life. (1) he prays for strength in the garden of Gethsemane. (2) he is mocked by the soldiers. (3) he is crucified while the women look on. (4) he is tied to a post and beaten.

The stone tracery and the glass of this window date from the restoration of the Chancel by William Butterfield in 1864. 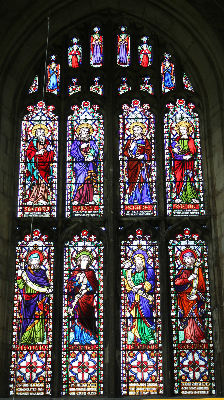 The eight huge panels of the West Window each display an important figure from the Bible.

This window is mid Victorian, based on the date of the Dedication, but while made to match the top row, the bottom row is of slightly later date. 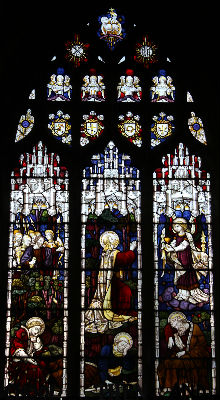 This window pictures Jesus praying in the Garden of Gethsemane just before he was arrested by the authorities.

The right panel shows an angel offering a cup resembling a chalice. This is the `cup of suffering’ which Jesus is about to endure.

The central panel depicts Jesus praying to God about his imminent ordeal, saying `Father, if you are willing remove this cup from me; yet not my will but yours be done’. Jesus’ blood will be shed to take away the sins of the world. It is this action which Christians remember in the service of Holy Communion.

The left panel shows Judas leads a crowd of heavily armed soldiers to arrest Jesus. They approach from behind Jesus’ back, through the trees of the Garden, and soon Judas will identify and betray Jesus with a kiss. Asleep on the ground are the disciples Peter, James and John, emotionally and physically exhausted and unable to support Jesus any longer with their prayers. Peter holds a sword, which he will later use to defend the group by cutting off the ear of the high priest’s servant, which Jesus will miraculously restore.

The top panels contain symbols of crucifixion and suffering; the Lamb and Flag, nails, IHS (in Greek the first three letters of the name Jesus), angels holding a Latin banner declaring Jesus to be the lamb of God who takes away the sin of the world; shields bearing instruments of crucifixion – hammer and pincers, the cross, the crown of thorns, the nails. 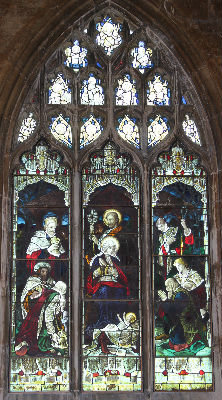 This is a traditional nativity scene, portraying the birth of Jesus in the stable at Bethlehem.

The central panel shows Mary, Joseph and the Baby Jesus lying in a manger. Mary gazes rather wistfully at her baby, who seems to be asking to be picked up. Joseph stands behind holding a staff which blooms lilies – a symbol of purity. A curious cow looks on.

The left hand panel shows three Magi kneeling as they present gifts of gold, myrrh and frankincense. It was traditional in the 19th Century to portray the wise man who brings the gift of myrrh as of Moorish appearance. Another curious cow watches from the background.

The right hand panel shows shepherds kneeling in adoration of their Saviour. In the background is a wooden stable construction, linking the three panels. This is a winter scene with trees bare of their leaves.

The top tracery contains angelic musicians and cherubim - a very common feature in stained glass tracery of this era as evidenced elsewhere in this church, but particularly appropriate here as the birth of Christ was accompanied by the worship songs of the angels. 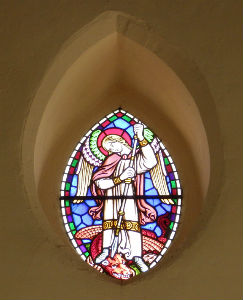 From the tower, looking back down the length of the church one can see high above the chancel arch a small lozenge shaped window which is linked to the tiny belfry on the roof outside, which housed the Sanctus bell.  This was rung during the mass at the elevation of the host. 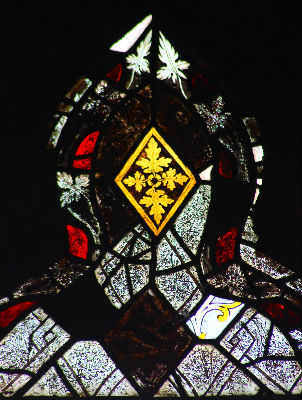 Other fragments of medieval stained glass, probably about 600 years old, are to be found in the window over the vestry. 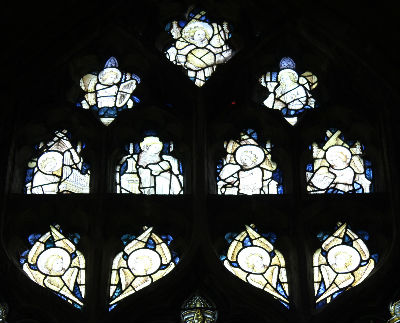 This window contains most of the medieval glass still surviving in the church. In the small panels at the top of the window angelic musicians are delicately portrayed, some singing, some playing musical instruments. Some of the panels have been imperfectly restored after damage during the Reformation, and have a slightly dislocated appearance.